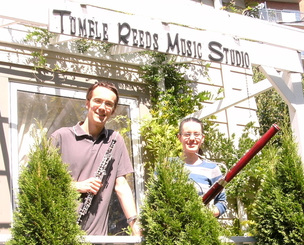 We are Margaret P. Fay and Graham Mackenzie, a husband-and-wife team of professional musicians with a passion for teaching.  We met as young professional musicians in 2006, and we enjoyed working with each other so much that we got married in 2011. We share many non-musical bonds, but music is what brought us together, and it brings us great joy in our daily lives.  We look forward to sharing our love of music with you, whether through private lessons or live performance!

A native of Halifax, Nova Scotia, Margaret Fay is a frequent substitute musician with the Windsor Symphony Orchestra, London Symphonia, and Niagara Symphony Orchestra. She has performed with the Vancouver Symphony Orchestra, the Kitchener-Waterloo Symphony, and Opera Ontario, and was a member of the National Academy Orchestra for two seasons. An avid chamber musician, she is a member of the Category 5 Woodwind Quintet, the Double Treble Trio, Trio Pistachio, and the Reed Minders Duo. Trio Pistachio was one of a select number of chamber groups invited to perform in the live round of the 2011 Fischoff National Chamber Music Competition. Her composition Canine Miniatures (2006) for oboe and bassoon was chosen for performance at the 2012 International Double Reed Society Conference in Oxford, Ohio, where she performed it with oboist Roger Roe of the Indianapolis Symphony.

Margaret holds a Doctor of Music in Bassoon Performance from Indiana University. She has also completed a Master of Arts in Music Theory from the University of British Columbia, a Master of Music in Bassoon Performance from Ithaca College, a Diploma in Chamber Music from Wilfrid Laurier University, and a Bachelor of Music from the University of Toronto. Her most influential bassoon teachers include William Ludwig, Kathleen McLean, Julia Lockhart, Jesse Read, Lee Goodhew, Nadina Jackson, and Chris Palmer. She is very grateful for the scholarships she received at every stage of her training.

She currently teaches bassoon at Western University, and has taught as a sessional instructor at the University of Guelph and Wilfrid Laurier University. During her three years of doctoral course work at Indiana University, she taught six undergraduate courses as an Associate Instructor of Music Theory. She has conducted master classes at the University of Victoria, Kenyon College, and Western University. As a private instructor, she has helped students aged 5 through 75 start ﻿﻿﻿piano and bassoon from scratch, prepare for RCM Harmony and History exams, and return to music lessons as an adult. Her students consistently perform well on RCM exams, typically earning First Class Honours or  First Class Honours with Distinction.

In her spare time, Margaret enjoys running with her dog Roadie, board games, ping pong, imaginative play with her three-year-old, and working on her no longer top-secret project: tap dancing while playing the bassoon. Margaret was thrilled to have been selected to appear on Season 2 of Canada's Smartest Person in Fall 2015. You can watch her go head-to-head with a surgeon, an engineer, and a football player through the CBC Canada's Smartest Person webpage.

Graham Mackenzie is principal oboist of the London Symphonia (formerly Orchestra London), Windsor Symphony, and Niagara Symphony.  He has also appeared with orchestras in Brantford, Chicago, Indianapolis, Kitchener-Waterloo, Toronto, and Winnipeg.  He has been a member of the Tanglewood Music Centre, Music Academy of the West, Civic Orchestra of Chicago, National Repertory Orchestra, National Academy Orchestra of Canada, l’Orchestre de la Francophonie Canadienne, the Banff Centre, and the National Youth Orchestra of Canada.

Equally at home as a soloist, he has performed concertos by Bach, Marcello, Martinu, Mozart, Strauss, and Vivaldi, with the Kitchener-Waterloo Symphony, Windsor Symphony, Niagara Symphony, and Hamilton Philharmonic, among others.  An avid chamber musician, he is a founding member of Trio Pistachio, and has performed in many Kitchener-Waterloo Chamber Music Society concerts as well as the Fischoff National Chamber Music Competition. In the contemporary music realm, he has performed with Soundstreams, New Music Concerts Toronto, and the Continuum New Music Ensemble.

In addition to his performing career, Graham is on faculty at Wilfrid Laurier University, and has conducted master classes at the National Youth Orchestra of Canada, National Academy Orchestra, University of Victoria, University of Western Ontario, and Kenyon College (Ohio).  He maintains a studio of private students, and is co-founder of the Tumble Reeds Music Studio in London, Ontario.

When he’s not performing, Graham enjoys raising his son Jasper, walking and skateboarding with his dog Roadie, running, tending to his fruit trees, ping-pong, board games, and making music with his wife, who is a bassoonist.
Powered by